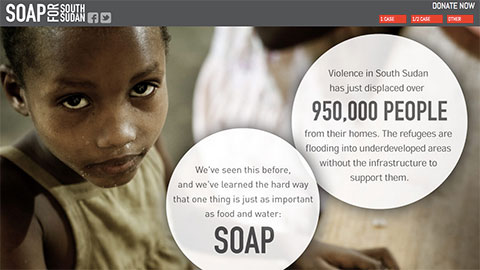 A while back, Drop in the Bucket, a charity operating in East Africa, asked us for help with the South Sudanese refugee crisis. UNICEF had tasked them with gathering enough soap to help prevent an outbreak of cholera. But speed was of life and death importance, and mobilizing donors around something as mundane as soap has always been a challenge for NGO’s in the developing world.

We named the project “Soap for South Sudan,” wrote the copy over a weekend, Drop handled the design, and in a week, a fully functioning, donation-ready site was live. (The project is no longer active, but you can still visit the site if you have the cajones to ignore a terrifying security warning.)

What happened was remarkable. The site went viral. It garnered and unheard-of 21% donation rate among all visitors, collecting more soap than enough soap for the displaced people.

The result? UNICEF had predicted cholera deaths of 50,000. The final toll? 22. Twenty two deaths. Thanks to UNICEF and WHO’s efforts with clean food and water, Drop’s efforts with sanitation, and the compassion of donors around the world, the outbreak never happened. This was the rare story with a truly happy ending.

More of our work